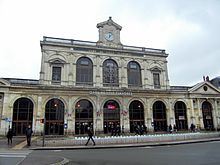 Lille is an important crossroads in the European high-speed rail network. It lies on the Eurostar line to London (1:20 hour journey).

The French TGV network also puts it only 1 hour from Pari CDG Airport, 38 minutes from Brussels and connects to other major centres in France such as Marseille, Lyon, and Toulouse. 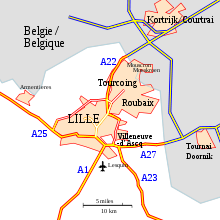 Five autoroutes pass by Lille, the densest confluence of highways in France after Paris:

Important: Free parking is available for the SERGS 2017 participants at the Lille University premises.

Lille Lesquin International Airport is 15 minutes from the city centre by car (11 km).

Its passenger traffic, around 1.2 millions a year in 2010, is modest due to the proximity to Brussels, Charleroi, and Paris-CDG airports. The airport mostly connects other French and European cities (some with low cost companies) as well as Mediterranean destinations.